Finding inspiration in Nature with the Edible Forest Garden

The Edible Forest Garden is a gardening technique inspired by the best the natural forest has to offer us. It’s a kind of orchard made up of perennials, shrubs and trees that, once mature, need very little in the way of fertilization, watering or maintenance to produce an abundant and diversified harvest. Edible landscaping is useful for gardens on every scale.

Our objective is to create a new ecosystem that’s adapted to the features of a particular site in order to provide a range of ecological services while at the same time meeting the needs of humans. 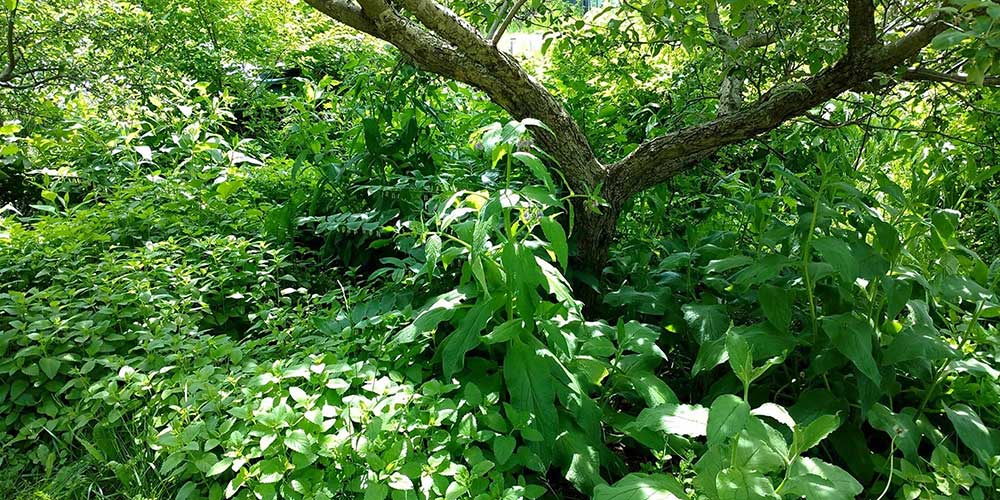 The Edible Forest Garden in a nutshell:

It’s important to understand that the Edible Forest Garden isn’t really a forest – the term is a metaphor for the way it works, inspired by the forest.

This interactive map shows the locations of 36 Edible Forest Gardens that are accessible to the public. That includes the winner of the 2019 “A fruitful addition to your landscaping” contest, École Saint-Philippe in Windsor, Quebec, near Sherbrooke.

When we observe forest systems, we can see that they are perfect examples of sustainability in our climate. And so, when designing useful edible ecosystems that reflect the qualities of natural ecosystems, we need to understand the governing structures, functions, models and processes of the forest, and especially the valuable knowledge we can acquire from it, notably when it comes to interdependence and mutual growth in the world of plants.

Whatever we choose to call it, it’s important to remember that this type of arrangement does far more than produce edible plants. It generates a whole set of resources that are extremely useful to humans, and also to the living creatures that are part of our ecosystem – animals, insects, fungi and microorganisms that grow on the surface and beneath the earth. Ultimately, the Edible Forest Garden seeks to create healthy and inspiring environments for the living creatures that work and move around in it.

Creating an Edible Forest Garden is an opportunity for people to work together on a marvellous project they can collectively take great pride in. It’s an event that shows us how to turn our living environment into a nourishing environment filled with opportunities for learning through nature.

Thanks to our collaborator

Proud member of the Arbre-Evolution coop, Wen Rolland is an ecological design expert who has a solid background in vegetable and fruit horticulture. He was a consultant and designer on many projects which fueled his passion for cold climate permaculture and ecological systems conception.

How to germinate seeds at home

For us here at Patience Fruit & Co, “slow living” is central to our philosophy. We take the time to…

Many people seem to think that eating organic food is complicated. Some even believe it’s only for the “upper crust”…